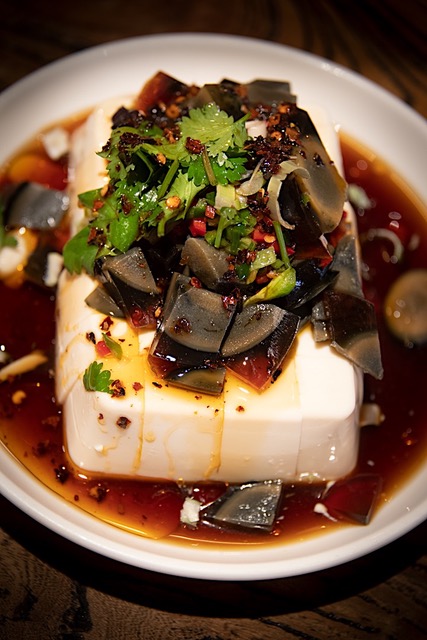 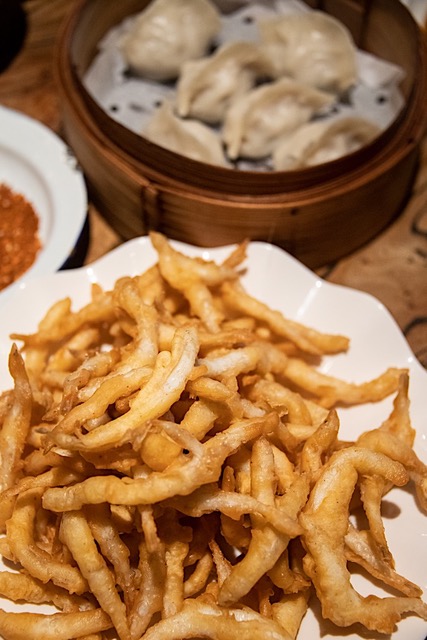 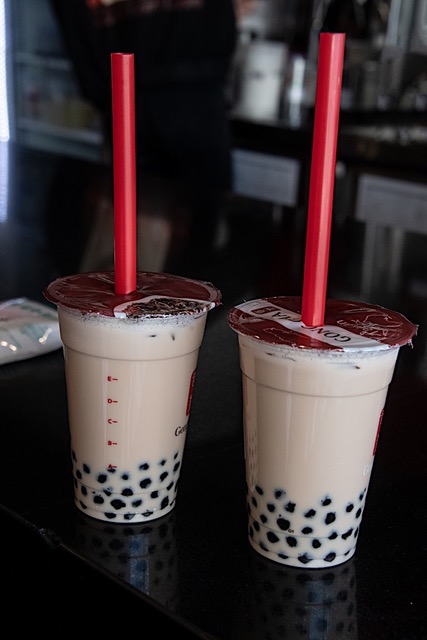 Covid19 hit the food stretch of ANZAC Parade in a double whammy. The bustling mom-and- pop shops cooking regional food from Indonesia, Malaysia, China, Korea and Thailand amongst others, have taken a bitter toll. Added to Covid lockdowns and their various guiding restrictions was the precursor of a dragged out period of jack hammers and orange cones while the light rail was being built through the avenue, long hampering the busy foot traffic that was commonplace in the area.

Many storefronts are shut tight.

Others open intermittently. Often websites aren't up to date so checking before you venture out doesn't always guarantee you'll find the gas rings on and the door propped open. Calling ahead is probably best.

I had been missing my visits to the area, so the other day, photographer and blogger Lorrie Graham and I headed over, determined to find some good food, and with a plan to collaborate on some of our blog posts.

I had a program mapped out: We would start at Rosebery Murtabak at 11 am for late brunch of a sweet and flaky murtabak (mine would be the one with a pandan base, filled with crushed peanuts and sesame- yuuuuuuuum!!!!), then cross the new rail tracks and head south to a couple of other targeted spots.

Murtabak for the uninitiated is a hearty, folded pancake. It is found in Arab countries, and in the muslim food stalls of SEAsia. Usually filled with chopped spiced vegetables or mince meat, the popular street food now caters to all tastes, including desert varieties.

In retrospect, our stomachs wouldn't have coped with visits to all the places I had picked out, so I shouldn't feel so sad that Rosebery Murtabak was closed. (Lorrie, true to her adventuring spirit tried again a couple of days later and found them open, and got a taste of what I was raving about).

Lorrie's eyes and camera were busy from the moment we stepped into The Northeast, so while she was thus occupied, I set to work on the menu, ordering us a plate of chilled tofu, topped with picked chilli, chopped century eggs and finished with fresh coriander, a plate of deep fried whiting with chilli salt for dipping, and a basket of steamed pork and cabbage dumplings.

Our tofu was delicious. Cool and utterly silky, it contrasted perfectly with the warm earthiness of the chopped black eggs and chilli, ending with the coriander's freshness.

A large plate of the whiting arrived, and Lorrie and I ate them like chips, dunking them into the salted chilli and popping them into our mouth- so good!

Finally came the steamed dumplings with accompanying sauce. After so many years of a worldwide dumpling drought, it's a nice situation to be able to easily compare and contrast one vendor's dumplings to another and hallelujah to that!

So anyway..... these were pretty good. The pale steamed skins were chewy and supple. There was lots of pork and cabbage mix and once you bit into the fat little parcels, a lovely bit of warm broth oozed forth.

The thick and seedy chilli paste with vinegar which many of the dumpling places serve as a side was not evident here, just some soy which was a little disappointing.

A sauce can make or break a food experience .....

While we ordered food which appealed to our senses for an 11 am start, the menu offered far more eclectic options like plates of pig organs, so one can be quite adventurous here.

Don't expect any service at the oddly over-decorated Northeast. We entered, sat ourselves down, and then I walked up to the back to find menus. When I asked about drinks, the young lady at the register said they were only offering water in their tin thermoses sitting on the tables already.

Cups and plates are enamel and tissues out of a box serve as napkins.

Ayam Goreng 99, only a few meters away was bustling and cheery. We stepped into the space wreathed at the front with a couple of vigorous green creepers, and along the walls were framed oil paintings of ...... chickens. Lorrie was much bemused at the theme until she found that 'Ayam' means 'chicken'.

We were here for two things: the friend chicken and the classic shaved ice dessert. We honed in quickly: Lorrie declared she was a white meat person, and me, I"m a dark meat girl form way back, so that was easy: a fried chicken leg for me, breast for Lorrie. Washed down please with Es Campur (Indon version) or an Ais Cendol (as neighbouring Malaysians call it).

This brisk operation is run by the Sathia family from Jakarta. When the young family arrived in Australia more than twenty years ago, authentic Indonesian food was pretty scarce, and that's when dad Juneady, a steel engineer decided to give the restaurant a go. Entirely a family affair, smiling Ibu Sathia is behind the service counter while two lovely daughters welcome visitors, call out orders, generally keep a good flow and ensure social distancing in a relaxed and friendly manner.

Our pieces of chicken came quickly on plastic plates, ungarnished. It felt like this was serious stuff. Why hide behind a piece of lettuce when you're this good.

I think I became a secret Queen of Fried Chicken when we lived in the South. That penchant has stayed with me, so I know my fried chicken. And this is good.

This is not battered; buck naked chicken is bathed in those particular sweet hot spices and sauces that are so reminiscent of the Indonesian islands. Grilled or friend (your choice) to absolute perfection, mouthfuls resound with succulence and flavour. 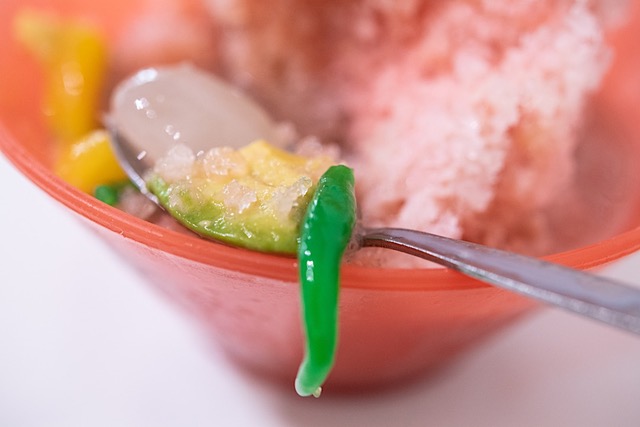 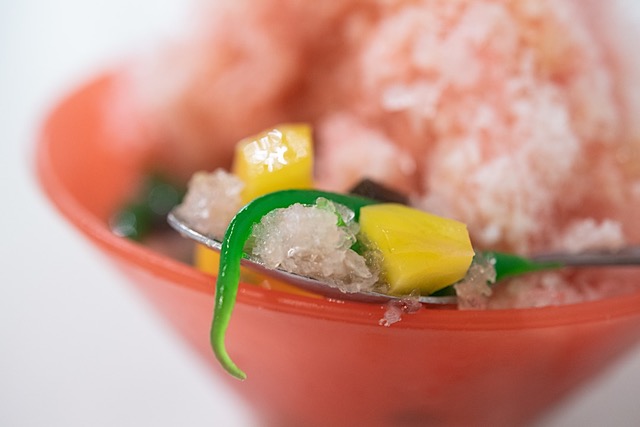 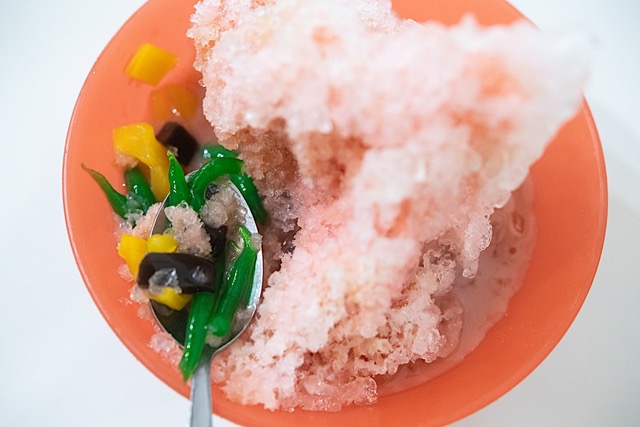 Our Es Campur arrived in its towering sweet perfection. In a modest plastic bowl, the pyramid of shaved ice sat on a base of green jellied 'worms', chopped black agar, crushed tinned corn with a liberal handful of hearts of palm. Over the crushed ice was doused a liberal amount of condensed milk and rose syrup. Yes, sweet city overload! Combining brain freeze, food coma and sugar high, Lorrie and I worried about our next steps.........

Es Campur is a uniquely SEAsian bowl of happiness. My childhood in the tropics was gratefully punctuated with lots of bowls of iced sweetness which got me through hot afternoons of P.E., tennis and the occasional roadside flag waving when one of the various monarchs was visiting town.

We staggered out with packets of 'emping' and 'kropok' for later consumption ( Would we ever eat again? We were so stuffed!). Lorrie had stopped and chatted with a table closeby- they were a Filipino family who had travelled from Blacktown to eat at Ayam Goreng 99. Dedication to good food knows no limit.

Fully satiated, I casually asked Lorrie if she'd ever had a bubble tea as we wandered past the tea cafe, Gong Cha. No, she said. Well, we were just going to have to find more room .....

We had been living in Los Angeles when the bubble tea craze broke years ago. Large tapioca pearls suspended in chilled, flavoured tea, LA teen queens thought they could get away with bubble tea being their food and drink.

Gong Cha offered something I hadn't seen before which was appealing; you could chose how much sweetening: none, a little or heaps? It felt good to be a little in control of such decadence.

It is disappointing though that the bubble tea business hasn't moved on from the high use of disposable plastic. Plastic cups, large plastic straws and a plastic cup cover are all mainstays which really need addressing. I'd be so happy to have my bubble tea in a milkshake like cup with a long spoon (like those used with an ice cream sundae).

Until that changes, I don't think I'll be indulging in too many more bubble teas, much as I love the combination of an iced black milky tea with intermittent chews on sago balls!

So that's scratching the surface of Anzac Parade in Kensington, NSW, folks. Come back to this post, and I'll keep adding reviews of the other great little places. Help that battle weary area find its feet again- go feed yourself some great food.

My foray back to Anzac Parade was made so much more fun with the company of the adventurous and generous photographer and blogger Lorrie Graham.

I am so thrilled and grateful to feature Lorrie's fabulous photos here, doing true justice to the food we enjoyed.

Find Lorrie's blog for her beautiful photographs, and great interviews with all kinds of inspiring good people in far reaching places.

Bells Line of Road: Back to Bilpin